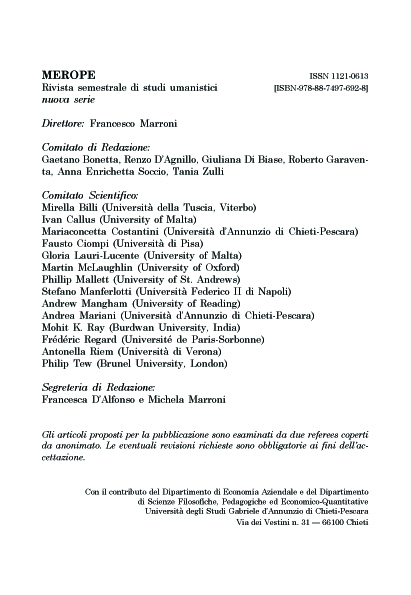 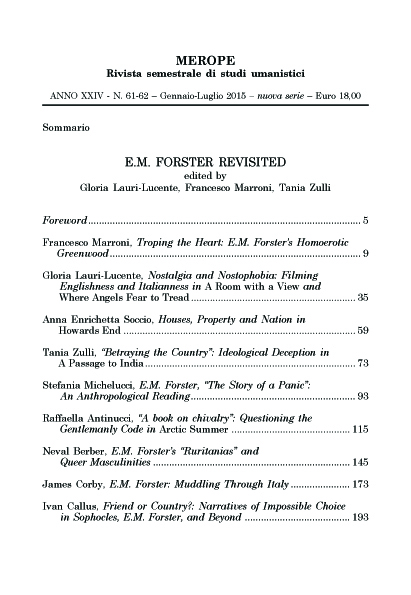 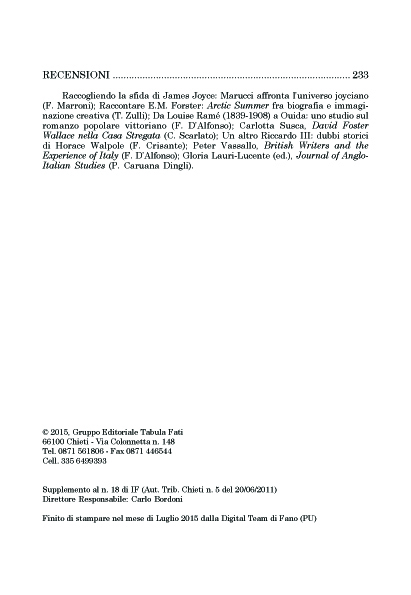 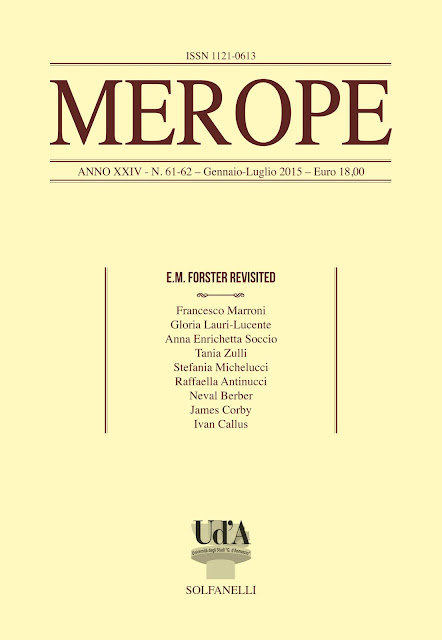 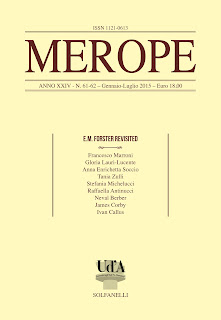 Gloria Lauri-Lucente, Nostalgia and Nostophobia: Filming Englishness and Italianness in A Room with a View and Where Angels Fear to Tread

Tania Zulli, “Betraying the Country”: Ideological Deception in A Passage to India

Stefania Michelucci, E.M. Forster, “The Story of a Panic”: An Anthropological Reading

Raffaella Antinucci, “A book on chivalry”: Questioning the Gentlemanly Code in Arctic Summer

Ivan Callus, Friend or Country?: Narratives of Impossible Choice in Sophocles, E.M. Forster, and Beyond


RAFFAELLA ANTINUCCI is tenured Reseacher in English Literature at the University of Naples Parthenope (Italy) and former Lecturer in Italian at Manchester Metropolitan University (UK). She has published articles on Victorian culture and fiction, literature and cinema, comparative literatures, and corpus stylistics. She is the author of a monograph on the literary representations of the Victorian gentleman (Sulle orme del gentiluomo: percorsi narrativi ed episteme vittoriana, 2009) and has co-edited a special issue of Rivista di Studi Vittoriani on Edward Lear (2012).

NEVAL BERBER is a DAAD Postdoctoral Fellow in English Studies at the University of Regensburg, Germany. She has published articles and edited volumes on the representations of the Balkans in nineteenth- and twentieth-century English literature. Her most recent books are Unveiling Bosnia-Herzegovina in British Travel Literature, 1844-1922 (2010) and Nello specchio dell’Altro. Orientalismo, balcanismo e queerness in E.M. Forster (2012).

IVAN CALLUS is Associate Professor in the Department of English at the University of Malta. He is the founding co-editor of the journal CounterText, launched with Edinburgh University Press in 2015, and co-editor of a number of critical collections, the most recent of which are Posthumanist Shakespeares (2012) and Style in Theory: Between Literature and Philosophy (2013). He is the author of numerous papers on contemporary literature, posthumanism, and poststructuralist theory.

JAMES CORBY is a Senior Lecturer and Head of the Department of English at the University of Malta. He is the founding co-editor of CounterText and a founding member of the Futures of Literature Network. He has published on literature and philosophy, including articles on romanticism, modernism, phenomenology, performance, politics, and contemporary American literature. He co-edited Style in Theory: Between Literature and Philosophy (2013).

FRANCESCO MARRONI is Professor of English at the Gabriele d’Annunzio University of Chieti-Pescara, Italy. He is Director of the Centre for Victorian and Edwardian Studies (CUSVE), Vice President of the Gaskell Society (UK) and editor of Merope, Rivista di Studi Vittoriani and Traduttologia. His most recent books are Victorian Disharmonies (2010) and Come leggere “Jane Eyre” (2013).

STEFANIA MICHELUCCI is Associate Professor of English Literature at the University of Genoa, Italy. Her publications include The Poetry of Thom Gunn: A Critical Study (2009), Space and Place in the Works of D.H. Lawrence (2002), the critical edition of Twilight in Italy and Other Essays by D.H. Lawrence (1997), and numerous articles on nineteenth- and twentieth-century authors and the relationship between literature and the visual arts. A new translation and edition of D.H. Lawrence’s The Fox is forthcoming.

ANNA ENRICHETTA SOCCIO is Associate Professor of English at the Gabriele d’Annunzio University of Chieti-Pescara, Italy. She has published articles on nineteenth- and twentieth-century authors (Charles Dickens, Thomas Hardy, George Meredith, Elizabeth Gaskell and Philip Larkin). She has co-edited a special issue of Rivista di Studi Vittoriani on Edward Lear (2012). Her most recent book is Come leggere “Hard Times” (2014).

TANIA ZULLI is Associate Professor of English at the University of Roma 3, Italy. She has published articles on colonial and postcolonial literature and culture. She has edited a volume on She by H. Rider Haggard (2009). Her most recent books are Colonial Transitions (2011) and Come leggere “A Passage to India” (2014). She is Secretary of the Centre for Victorian and Edwardian Studies (CUSVE).